It’s been another bust 5 weeks and although progress on the brewery shed is slowed I’m not too far from getting the first brews on.

So what has been achieved? Well the building is clad in the Siberian Larch, the electric supply is in, as well as water, and there is even a sink! And most importantly from the view of the missus the back room now had a dining table and all the brew kit is in the shed.

So the shed from outside is looking smart, clad and it even has doors!

The only thing missing now is the patio but that may be a while due to what could be best described as renovation complications in the house, lets just say the roof has been leaking for a while and when the windows were taken out some of the lintels were a little rotten and in some cases non-existent!

One of the most important (and expensive) jobs was getting electricity to the shed, and now there is a 60amp supply run from the house via a nice bit of 16mm2 armoured cable. I have a 32 amp supply for the control panel, 12 double sockets, and 5 LED strip lights all running from  the sheds own distribution panel.

The brew kit is in its new home with the main brewing vessels in about the right place.

A water supply has been hooked up, along with drainage and the RO machine has been mounted above the sink and plumbed in, along with a UV filter with has yet to be plumbed in. A sink was bought via ebay and is in and working – cold water only. But from the picture below you will see the plug socket needs to be moved, bit of a miss calculation on my part there! Hopefully in the future I will get a small wall mounted hot water heater just need to find the right product.

And this is why i need an RO machine – total disolved solids (TDS) in is 350 and out is 11! The water where i have mooved to is very hard – not ideal.

My barrel collection has taken up residence at the back of the brewery, so far 5 barrels have been moved in, of the 4 wine barrels I had 1 of them looks to have been lost to an infection. It may be salvageable but I need to wait and see what happens after some intensive cleaning, worse case it will be recycled into a couple of planters. And once I get properly sorted out I should have room for 10 barrels at the back of the brewery if needs be. 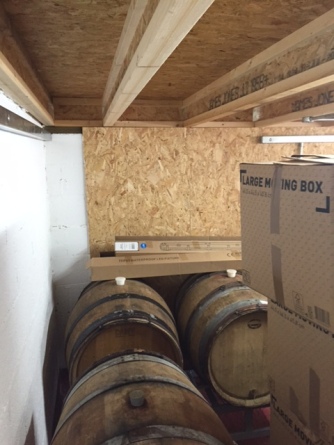 These barrels are the future of any commercial aspirations I may have and will be filled shortly with a range of mixed culture sour beers and also hopefully some truly spontaneously ferment wort.

Most of the fermenters are where they will spend the next few years and now they all need connecting up to chillers and temperature controllers and will then require a deep clean before use. 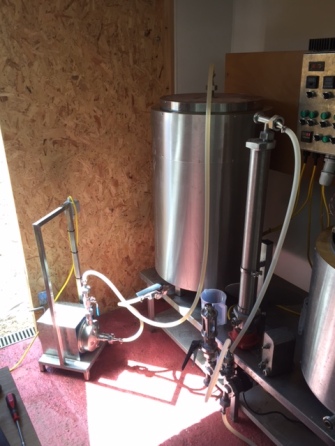 The store room is full already but a good sort out will again create some space. 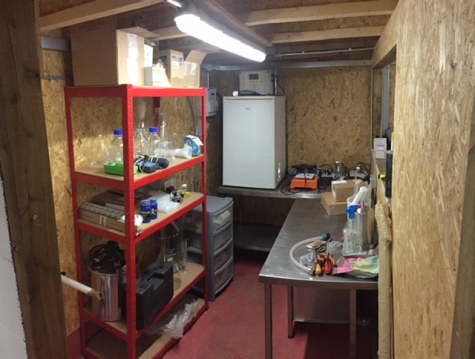 The biggest job left now is to have a major sort out, and then sell off some stuff I have not used for a long time or am unlikely to use in the future; it appears I have amassed a lot of stuff and a lot of it shinny! I did wonder at one point if the brew shed was big enough :- )

The focus now really has shifted from building too sorting/organising and simply getting the brewery up and running. I think another day or 2 of sorting and prep work and I should be good to go. Or to put it another way – the time it takes to grow up a yeast starter of Wyeast 1318 for a 80 L batch of Pale Ale and I should then be good to go. As always tho work has gotten in the way again and the starter won’t happen for a couple of weeks. But I cant complain to much as work has made all this possible.

So what going to get brewed, well once I start brewing I want to fill barrels as fast as possible as well as replenish stocks as we have pretty much run out of kegged beer. Currently we are drinking a Belgian Pale Ale which must be 6-8 months old and has been treated badly in the keg due to the house move but despite this it’s still very drinkable, and would still score 34-35 points in a BJCP comp, its not outstanding but still has no major issues and drinks very well on a hot day sat in the garden. The Belgian Pale Ale was brewed with WLP 530 it’s a very resilient yeast just like WLP565.

So very soon on the brewing schedule is:

So hopefully some 760L of wort will be produced, 3 barrels will be filled, and keg supplies will be replenished!

Well thats the plan, guess there will be a part 3 now showing one of the upcoming brews!