After a couple of emails with Toby at the Kernel Brewery I managed to get myself invited along for a brewday on the 20th Feb 2013, and a cracking day was had. The brewery is on a small trading estate under some railway arches, along with a range of other small business including a cheese makers and a bakery – beer, bread and cheese what more could you want!

And you have to love the brewery signage:

They have a 20 barrel system, with a single infusion mashtun and a gas fired boiler shown below. 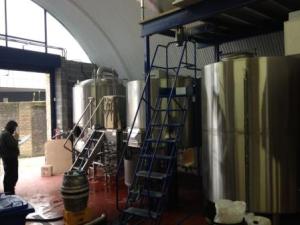 The planned brew for the day was a Porter and the grain had already been loaded into the hopper so the first job was to get the mash on. 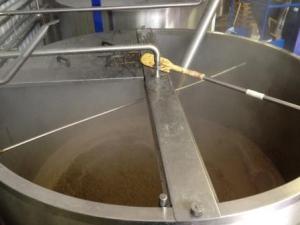 I asked the question what temp do you mash at? The response was very refreshing – the strike water is about 74 and we will lose about 7-8 deg by the time we have mashed in, so I ask have you got a temp probe I will take a reading? No it broke last month and we have not got a new one yet. I did not ask if they had a pH meter as i could guess the answer, but I have to say what a great way to brew the beer, they don’t feel the need to check every thing all the time, they have faith in the process, and from the conversations with the brewers they have freedom to alter the grain bills, hops, and hop additions. They may have some of the latest brewing equipment but it’s a very artisan approach which clearly works. The proof is in the quality of the beer produced.

So, after what (I think) was a 90 min mash the wort was transferred to the boiler via a whirlpool to remove any grain or other debris for a 90 min boil.

The wort was cooled and pumped into one of the 20 barrel conical fermenters and good old us-05 was the yeast of choice. 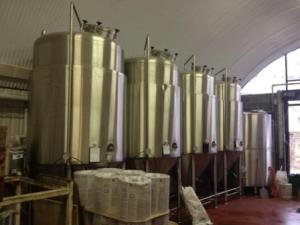 It was then time for a bit of a clean up before dashing of to the Euston Tap for a light refreshment followed by the Earl of Essex to finish the job off!

Cheers to all at The Kernel brewery for a great day.

One thought on “The Kernel Brewery Brewday”